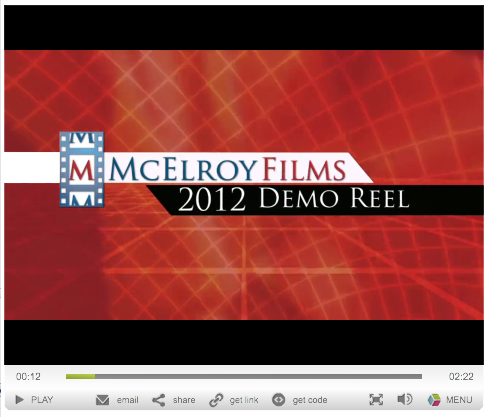 As we reflect on the last 12 months, 2011 brought many exciting changes to our Boston-based video production company. When McElroy Films outgrew it’s office, increased staff, won 3 more Davey Awards, and expanded services all within a calendar year, it’s safe to call 2011 a success, but that success is something we’ve come to expect in our office. Yet again, we were awarded three more Davey Awards for non-profit videos produced for Fenway Health, the South Shore Habitat for Humanity, and the New England Pediatric Center. The latest awards came in addition to the Telly Award given in early 2011 for yet another Fenway Health video.

The winning ways extended into our wedding division as McElroy Weddings won the highly coveted Bride’s Choice Award from the Wedding Wire and the Best of 2012 from The Knot. Both awards are based solely on positive client reviews and are only awarded to the top 5% of the many hundreds of thousands of members on each website. Acclaimed singer, Brian Evans, originally of Haverhill, MA, enlisted us to promote his hit single At Fenway in a 30-second spot featuring Hall-of-Famer Jim Rice. The spot not only fueled the song’s induction into the Baseball Hall of Fame, but also aired during the Super Bowl in several regions across the United States.

We also produced a hip-hop music video for local artist, G-Star, which accrued hundreds of thousands of views on YouTube in mere weeks. At about the same time, McElroy Films delved into the New Hampshire Republican primary, becoming former Speaker Newt Gingrich’s personal videographers at a time when the race was still hotly contested. Videographers Ben and Brittney found themselves traveling to every corner of the Granite State, following Newt as he campaigned from senior centers to college campuses. After the New Hampshire primary, McElroy Films produced web spots and commercials for the South Carolina primary. New videos for non-profit Fenway Health were featured at two of the largest gala events for the LGBT community in the country in both 2011 and early 2012: The Men’s Event and the Women’s Diner Party. Another non-profit giant, the Crohn’s and Colitis Foundation of America (CCFA), had a video produced for their premiere fundraising event as well as videos detailing the CCFA’s major fundraising programs such as the Take Steps and Team Challenge campaigns. All the videos went a long way in detailing the missions of Fenway Health and the CCFA for potential donors.

The past year also included training videos for Triple-S and the Boston Fire Department as well as educational videos for Fenn School, Holy Name High School, and the Pakachoag Music School.

With all the success and a host of new projects on the horizon, McElroy Films seems ripe for even greater success in 2012 and beyond. We would like to thank our clients for trusting us with their video, web hosting, and distribution needs, as, without them, our success wouldn’t be possible.