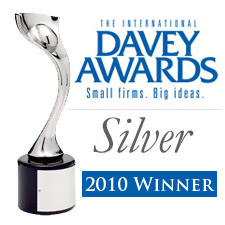 Boston Based Production Company McElroy Films has won the Silver Davey Award in the category Charitable/Non-Profit for the 6th Annual International Davey Awards for 2010. This award is on behalf of the International Academy of the Visual Arts and the Davey Awards. The 2010 Davey Awards feature an incredible pool of over 4,000 entries from the best small firms in the world.

As a company McElroy Films is very honored to be apart of this selection. Additional winning titles include: Maskar Design, The Dow Chemical Company, Wired Safety, Zemoga, A&E Television Networks, Sony Pictures, The Coca-Cola Company and many more.

Our winning entry that was selected is shown below. The South Shore Habitat for Humanity – Family Partners is the official title. Produced by Benjamin J. McElroy and Dan Knapp. McElroy produced, shot and edited the entire video from start to finish. Take a look below and enjoy.